Clinton Global Initiative Recognizes CEFGA for Commitment to Action; Announcement Made in Atlanta with President Clinton and Mayor Reed

ATLANTA, GA – On June 14, 2016, CEFGA, in partnership with TCWFI, committed to replicate their proven construction and ready mix driver training model in communities south of I-20 in Atlanta. Over a period of three years, these training programs will lead to full-time living wage employment for over 250 metro Atlanta residents from communities where more than 20% of the population is unemployed and many have significant barriers to employment. Of the 250 participants, this program aims to serve 150 formerly incarcerated individuals and increase the participation of females in the program from 10% to 15%. CEFGA plans to implement 14 20-day boot camp style training programs (known as Construction Ready) and 10 40-day ready mix driver training programs (known as Driver Ready) by June 2019. 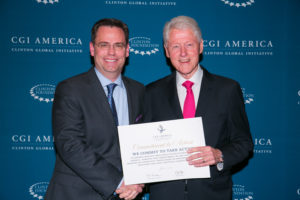 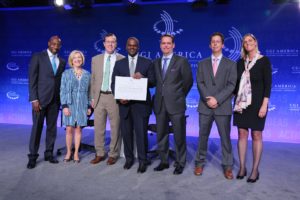 Atlanta Mayor Kasim Reed recognizes CEFGA and four other organizations for their Commitments to Action at CGI America 2016 in Atlanta, GA.

This commitment will replicate a proven employment model to communities south of the I-20 where residents experience significant barriers to employment. Of the 250 residents the partnership will serve, 150 are expected to be formerly incarcerated individuals. In addition, the program aims to have at least 15 percent of participants be women.

Through a similar program at Westside Works, CEFGA has graduated 224 metro Atlanta residents and placed 207 into full-time employment, for a placement rate of 92%. The average entry level wage is $12.60 per hour, with graduates earning on average 8% wage increase after one year. In addition, 80% of Westside Works graduates have a criminal background, so CEFGA is successfully serving a population with high employment barriers.

CEFGA’s strength is its understanding of the construction industry’s workforce needs and its relationships with Atlanta’s largest employers. CEFGA will be responsible for training, job development, and employer network management. AWDA is responsible for determining WIOA eligibility and funding those students who qualify. TCWFI knows the neighborhoods south of I-20, and all of the key community based organizations there. TCWFI has effectively served these communities with a two generation approach, including employment services, individual coaching and training and employment services for more than 10 years. TCWFI will be responsible for recruitment, intake, coaching, and case management, including supportive services for all students.

HB NEXT, CEFGA’s training partner, will assist with interviewing candidates and will provide most of the training. Funding will be provided by AWDA, The Annie E. Casey Foundation, Atlanta CareerRise and others to be determined.

Between June 2016 and June 2019 the program will train 250 people and implement at least 14 Construction Ready Classes and 10 Driver Ready Classes. Each Construction Ready program will have a hiring fair three weeks after the start date and a graduation the following day. A debrief will occur within one week of each classes completion, and data collection will be ongoing every 30 days.

January 2017  June 2017: An additional two to three Construction Ready classes and two Driver Ready programs will be implemented. Plan to train a total of 90-100 students by this time.

July 2017  December 2017: An additional two to three Construction Ready classes and two Driver Ready programs will be implemented. Plan to train a total of 130-140 students since the launch of the program.

January 2018  June 2018: An additional two to three Construction Ready classes and two Driver Ready programs will be implemented. Plan to train a total of 170-180 students by this time.

July 2018  December 2018: An additional two to three Construction Ready classes and two Driver Ready programs will be implemented. Plan to train a total 200-210 students since the start of the program.

A recent survey of Atlanta’s largest construction companies revealed that 79% of construction employers are having a hard time filling key hourly craft positions. Based on current construction projects and anticipated projects in metro Atlanta, this trend of high demand for construction services and low supply of skilled workers is anticipated to continue for the next three to five years.

Many Atlanta residents south of I-20 have significant barriers to employment, including low educational attainment, lack of work experience, criminal backgrounds, and lack of access to childcare. The service area for this commitment has unemployment levels that far exceed those of surrounding communities, as well as state and national levels. As of June 2015, Georgia’s unemployment rate was at 6.1% and the City of Atlanta unemployment rate was 6.7%. The unemployment rate for this Neighborhood Planning Unit (NPU-V) is an alarming 23.1%.

The Construction Ready and Driver Ready Programs at The Center for Working Families, Inc., (TCWFI) will be a bridge: screening, motivating, training, credentialing, and connecting metro Atlanta residents south of I-20 with Atlanta’s top commercial construction employers. Residents who successfully complete the Construction Ready and/or Driver Ready Program will be placed into living wage jobs, earning an average of $12.50 per hour, working with companies who will continually invest in them as they advance in their careers.

In order to complete this commitment, CEFGA is seeking additional funding partners, employment partners (trade associations, contractors and trade unions) as well as government partners who are able to bring financial resources to the partnership. In addition, there will be opportunities in the future to expand the program to other parts of metro Atlanta, where CEFGA will be seeking other nonprofit partners to assist with recruitment and promotion of the program.

As part of this commitment, CEFGA is offering contractors, trade associations, and trade unions in metro Atlanta an opportunity to partner to help place their graduates in jobs and provide input to improve the program.