As the group of students filed into the meeting room, someone asked, “LaKeisha, what’s in that box?”

Lockard, a member of Construction Ready at Westside Works’ second graduating class, was right. When the morning’s graduation ceremony ended, each of the 13 graduates had a job offer in hand and there were few dry eyes in the room. 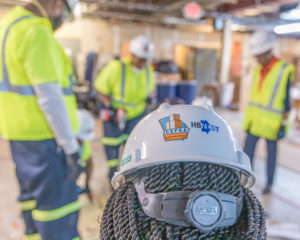 Opened in June 2014, Westside Works was the first of what is now four Construction Ready sites around metro Atlanta, each offering a four-week, boot camp-style training program for residents of its surrounding area. In that short time, more than 700 Construction Ready graduates have been placed into full-time employment.

Many of the initial job placements coincided with the early stages of construction at Mercedes-Benz Stadium. As the program took root and expanded, more industry partners have come on board and graduates have landed jobs across a wide variety of disciplines and locations.

“It’s a doorway,” said Billy Freeman, owner and CEO of Technique Concrete Construction. “These men and women have careers now.”

Nicholas Holmes, for example, had worked a series of warehousing jobs, “doing the same thing day in and day out with no hopes of improvement,” he said. After graduating from Construction Ready, he was hired by Anning-Johnson, a specialist in decking, roofing and wall systems.

“As I leave this program, my confidence level is extremely high,” he said. “The staff here pushed and motivated us and allowed us to learn things. There’s no guarantee of a job, but if you come here and apply yourself, the opportunity is there.”

High Expectations
Prospective students are screened by CEFGA staff, which then works with HB NEXT, the program’s training provider, to interview and place prospects into a class.

The program operates on a points system, with each student allotted 100 points at the outset. Tardiness and other infractions result in point deductions; if a student falls below 70, they effectively fire themselves from the program.

Each Construction Ready location – Westside Works, TCWFI, Aerotropolis and Build Cobb – has a site manager who works with HB NEXT instructors to enforce the standards.

The students also push one another, forming a tight-knit the group in the process. “On day one, it’s real quiet,” said Construction Ready Vice President Jamie Buck. “Nobody really knows anybody. By week two it’s getting a little louder, and by the final week everybody is cheering and clapping. They go from a group to a team, and it’s so much fun to watch that.” 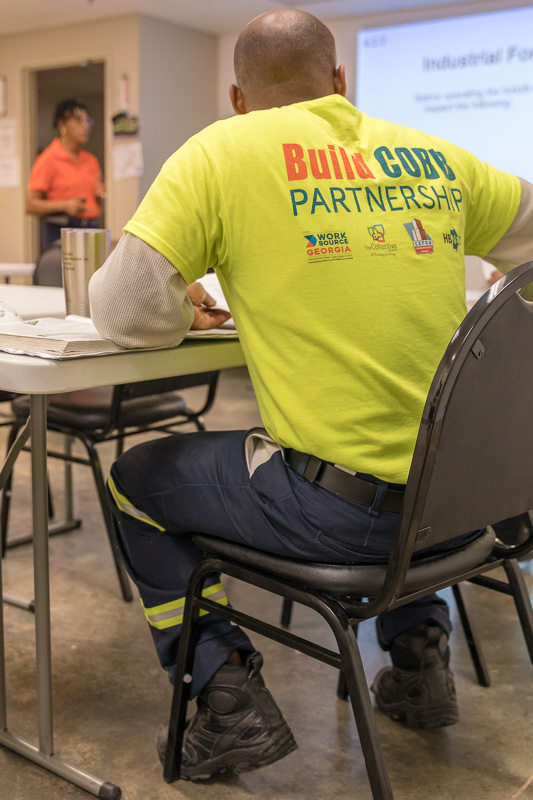 Graduates leave the program with national and industry-recognized credentials – potentially as many as eight – including the National Center for Construction Education (NCCER) Core, OSHA10 Certification and CPR/First Aid Certification. They also receive training in interviewing and other soft skills, plus daily “lunch and learn” talks from contractors and other industry professionals.

“It was a lot of information to retain in a short amount of time, but we all came together and helped one another,” Holmes said.

“First, we are industry driven,” Shelar said. “That means all of our curriculum and all of our processes were developed by employers and industry professionals like HB NEXT. Our objective is not to train and certify people. Our objective is to help people prepare for and find meaningful careers.

“Second, we work hard to simulate the work environment. We have expectations, and we have consequences when our students don’t meet those expectations. This is real world stuff. This is what happens on the job.”

Second Chances
At the program’s conclusion, representatives from some of Atlanta’s leading construction companies come in for a Construction Ready Hiring Fair. It’s a two-way process designed to identify the best match between student and employer.

The big moment comes on Graduation Day. Each student is called to the podium and given an envelope with a job offer inside. That’s when the tears start flowing.

For Jeffrey Carr, who was hired by HHRMJC-Concrete, the credentials were invaluable. “It’s taken me off the sideline and put me back in the game,” he said.

Added Gene Gaines, who received his offer from Holder Construction: “For us to go through this in four weeks and meet the people we met and obtain the knowledge and credentials we have gotten, it’s unprecedented.”

For many students, Construction Ready represents a second chance they might not get elsewhere. Kamara Johnson, for example, came to the program while on probation. While checking up on her, her probation officer saw the value in what she was learning at Westside Works.

As Buck recalled: “Kamara pulled me aside one day and said, ‘Jamie, my probation officer said she spoke to the judge and let them know what I was doing here, and he wiped my probation clean.’ She had tears in her eyes, and I thought, ‘Oh my gosh, this is really making an impact on somebody’s life.’”

The Vine City resident was hired by Anning-Johnson and called Construction Ready “one of the biggest blessings of my life.”

“It’s like a rebirth,” Johnson said. “All the doors had closed on me. I made a mistake when I was younger and I paid for it for years. But this is a program that will give you another chance, and if you really want to do it, you can prove to people that you are somebody.”

With the launch of each new Construction Ready site comes the potential for boosting the collective outlook of the community in which its located. On Atlanta’s Westside, for example, HB Next instructor Johnny Hughes said many Construction Ready graduates “have a sense of ownership in the new stadium. They can say to their kids, ‘Daddy helped build that,’ and that sense of pride transfers to the children. It can only benefit the neighborhood.”

Added Buck: “The community can see their peers find jobs and climb the ladder economically. I think it definitely helps the morale of the area.”