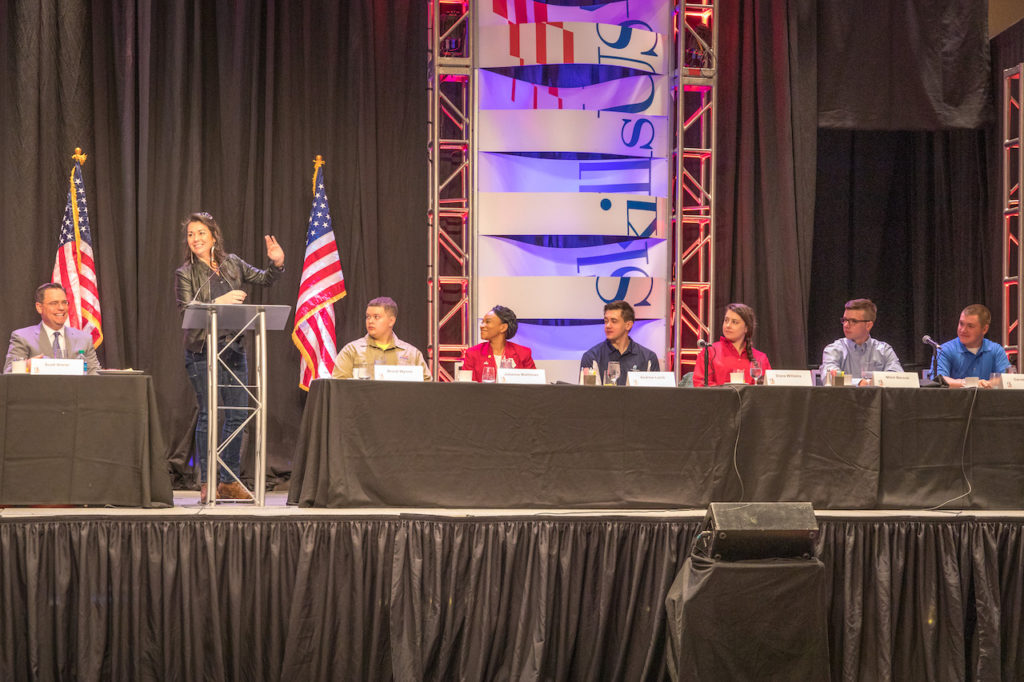 DIY Network personality Kayleen McCabe celebrated the successes of a group of recent high school graduates and young professionals earning a living in the construction industry.

To attendees at the 2019 CEFGA VIP and SkillsUSA Champions’ Breakfast, the message was clear: Lucrative opportunities abound for young men and women interested in construction careers in Georgia.

A capacity crowd packed the Georgia International Convention Center’s International Ballroom for the March 22 gathering, which featured a speaker lineup of education and industry leaders and a panel discussion led by TV host Kayleen McCabe with a group of young construction professionals.

President and CEO Scott Shelar traced CEFGA’s evolution from its 1993 founding “by a group of visionary construction leaders who saw a need to promote the skilled trades in a positive way” to its position today as “a thriving statewide organization, a powerful and effective voice for construction workforce development in Georgia.”

“It’s a great time to be in Georgia,” Matt Arthur, Commissioner of the Technical College System of Georgia, told the 400-plus students in attendance. “When you look at the number of companies that are coming to Georgia and that are already here, the skills that you’re learning can carry you on into further education, or you can have a job, or better than a job, you can have a career. That’s what’s waiting for you.”

CEFGA has built relationships with numerous partners over the years to help make its educational and career promotional efforts possible. One of those partners, the Home Depot Foundation, was represented by Jena Alford, Manager of Atlanta Hometown Giving, who said, “The Home Depot and the Home Depot Foundation are truly committed to the trades, and it’s inspiring to see so many young faces here this morning. We’re so proud to partner with CEFGA … to strengthen existing high school construction programs. We love the work that you do.”

McCabe is another vocal advocate for CEFGA’s work in promoting careers in construction. The host of DIY Network’s “Rescue Renovation” produced a video of four young professionals who are thriving in construction careers. (Click below to view it.) After screening the four-minute segment for the breakfast audience, McCabe conducted a question-and-answer session with its subjects: Andrew Lamb, Carpentry Apprentice for Anning-Johnson Company; Diana Williams, Electrical Apprentice with Allison-Smith Company; Mitch Beccue, Field Employee at Carroll Daniel Construction; and Garrett Beatty, Ground Laborer for C.W. Matthews.

“I’ve spent years in front of a camera, so it’s great to turn the camera around and start to tell the story of what an amazing career this really is,” said McCabe, who is a licensed general contractor herself. “Taking four young professionals and throwing a camera in front of their face is intimidating – it’s not really something most people are comfortable with. But I was so impressed with the four of you, your candor, and how loved you are by your supervisors. They talk highly about you, about your skills, about your potential.”

One memorable moment in the video is the students’ response to the question, “How much have you spent on your post-high school education so far?” Each of the four responses was zero, prompting a high-five from McCabe and highlighting the value of the company-provided, on-the-job educations these employees are receiving.

“In this career path, you can earn while you learn,” McCabe said. “What an incredible opportunity, because you’re coming into a career with such high earning potential and no [student loan] debt.”

The young workers also spent time in the video debunking common misconceptions and stereotypes about construction careers, and discussing the pride they take and the satisfaction they receive from their work.

Following the breakfast, McCabe and the rest of the speakers moved to the GICC expo floor for the ceremonial board cutting that officially opens the SkillsUSA State Championships. High school and technical college students then spent the day competing for the right to represent Georgia at the national SkillsUSA Championships June 26-27 in Louisville, Kentucky.

The event, Shelar said, “is an exciting and tangible demonstration of the work that CEFGA does throughout the year.” It includes longtime volunteers and sponsors such as the Atlanta Electrical Contractors Association (AECA) and Independent Electrical Contractors (IEC), Holder Construction Company and Anning-Johnson Company, as well as newcomers such as R&D Mechanical Services, which hosted the HVACR competition. 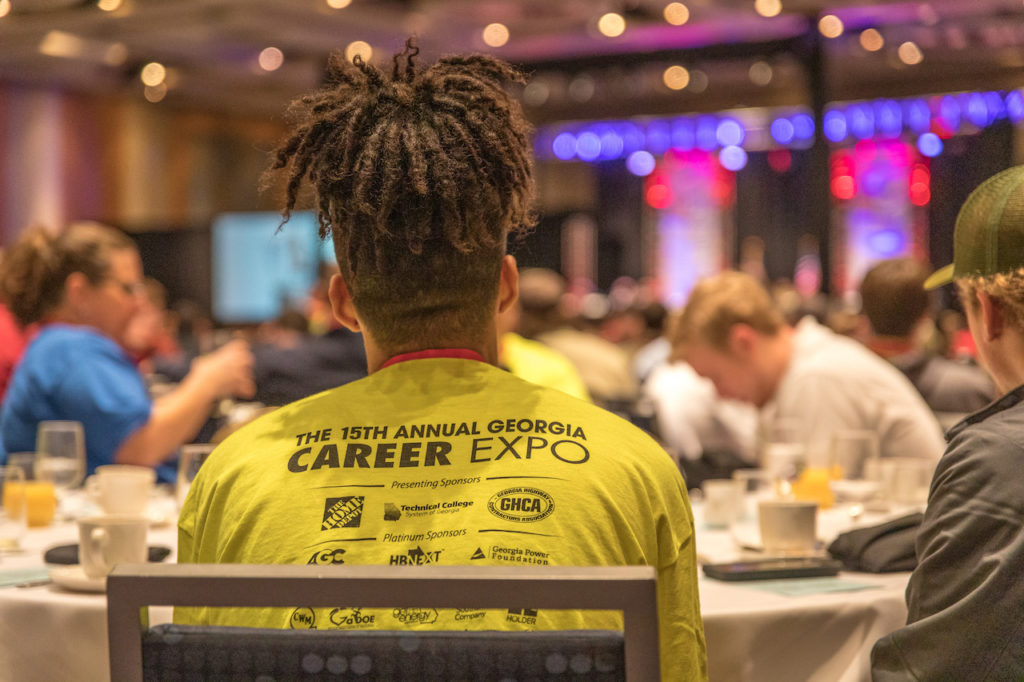 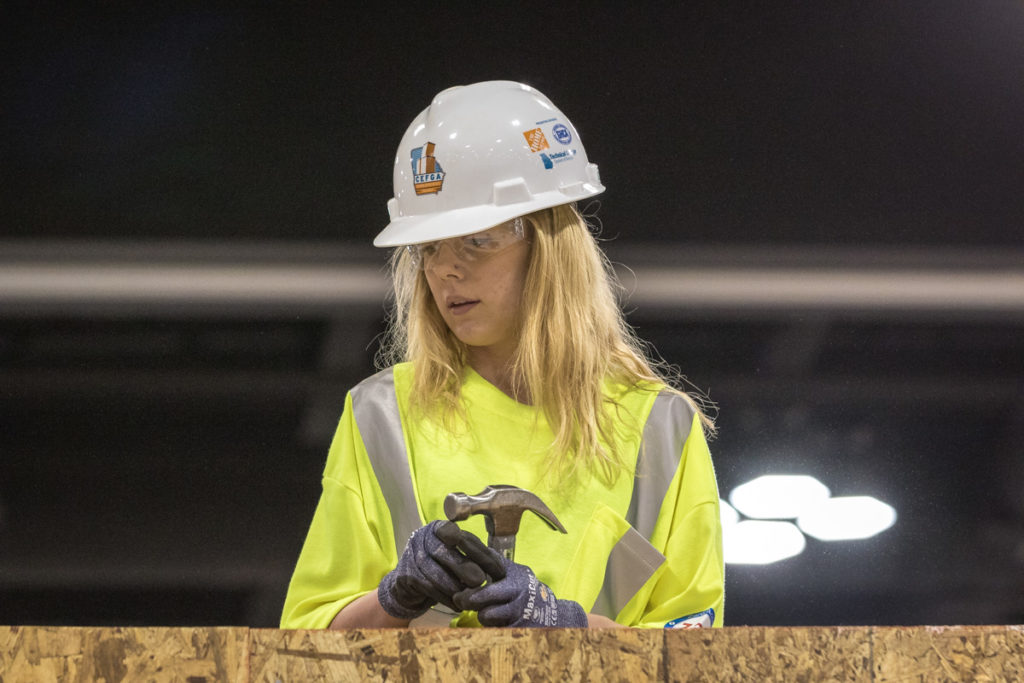 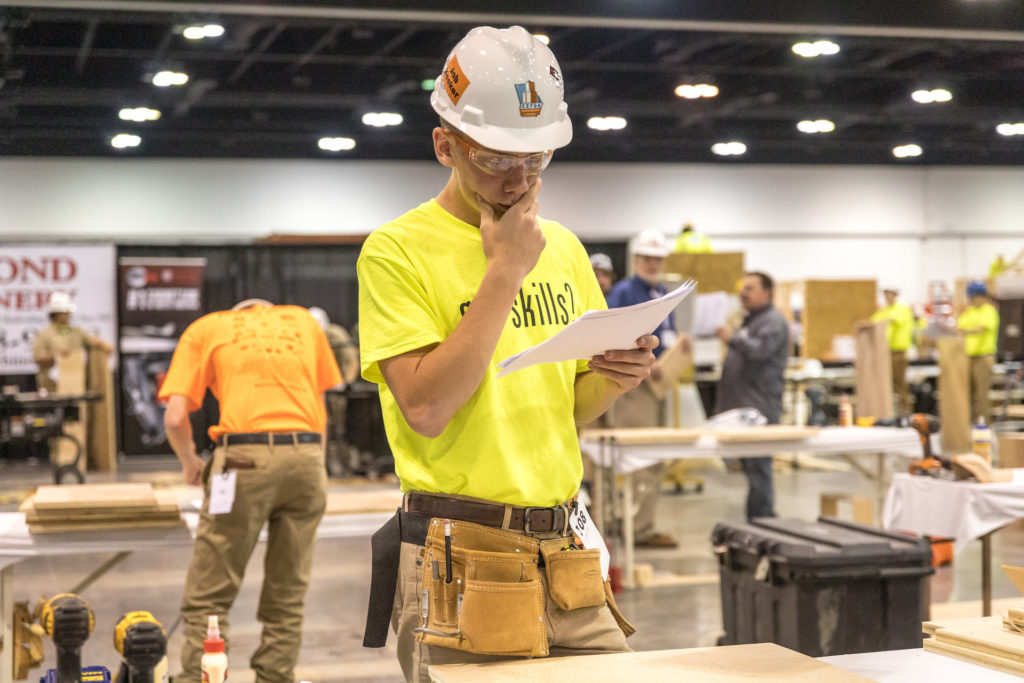 “This is our third year participating and our first year hosting the competition,” said Jessica Helms of the Matiak Foundation, which was founded by R&D Mechanical co-owner Heath Matiak. “We came and walked through as guests – Zach [Fields] and Scott showed us around. Last year we participated in the hiring fair and the CareerExpo, and observed the HVAC contest, and this year we are hosting the HVAC contest.”

Added Helms: “The first year we were here, I remember walking through and having to pick my jaw up off the floor. It’s just amazing what’s going on here, and from the moment we walked in, we were excited to be a part of it. Seeing the talent that comes through, as much as we can partner with these up-and-coming leaders and get them to partner with us, that’s what we’re all about.”

Alex Edgar is a senior manager with Holder Construction, which runs the Home Depot-sponsored TeamWorks competition. He has been involved in SkillsUSA for five years and said the effort is a win for everyone involved, from competitors to industry participants to the workforce as a whole.

“We can’t do anything without our partners in the trade community, so to us, everything we can do to help develop the workforce impacts us as well as our trade partners and makes it possible for all of us to do our jobs,” Edgar said.

At the SkillsUSA breakfast, Shelar encouraged industry partners to build relationships with schools and teachers not only at the CareerExpo and SkillsUSA State Championships, but through CEFGA’s K12 Pipeline throughout the year. He cited the four employers in the video – Anning-Johnson, Allison Smith, Carroll Daniel and C.W. Matthews – for their success in using this approach, as well as the Atlanta Electrical Contractors Association, which recruits approximately 100 students for its members every year.

“You have to be intentional as a company about reaching out to and engaging these [school] programs,” Shelar said. “These are companies that do an outstanding job of being aggressive about building relationships with our high school construction programs. That is the reason that they’re able to hire these students. You have to be not only involved in this event, which is great – we’re glad that you’re here – but you have to roll up your sleeves and be active at the local level and with your local construction programs.”

Steve Necessary of Holder Construction serves as another great example of that get-involved mentality. Necessary, who delivered a safety briefing at the SkillsUSA breakfast and has served at the competition for the past decade, said Holder works “with the schools as closely as we can. I’m involved with the OSHA Youth Alliance, so I get out to some of the schools and conduct OSHA 10 classes and get a little more interaction with the kids than I get if I were just attending this event. It’s very rewarding. This is our future – these are the folks who will build America in the coming years.