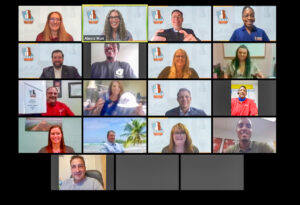 Created in partnership with Atlanta CareerRise, the Craft Pro Champion Awards lift up field-level employees, along with companies who are investing in those employees to ensure long-term success as the construction industry strives to overcome the ongoing labor shortage.

“We received a ton of applications from all over, every corner of the state of Georgia,” CEFGA President and CEO Scott Shelar said. “We were really excited about the number of applications we received this year.”

The 2020 Craft Pro Champions are as follows: 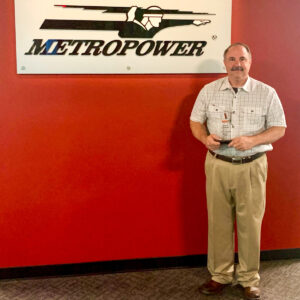 This award recognizes employers for using workforce development strategies that promote field-level career progression and provide workers with accessible training and skills development opportunities. MetroPower has significantly grown its workforce development programs in recent years, and has a dedicated workforce development team that focuses on recruiting, hiring, career development and advancement. This team has a targeted recruitment plan that visits high school construction and engineering programs, and builds relationships with community partners such as CEFGA, IEC, AGC and more

“MetroPower is honored and humbled to be selected the Craft Pro Champion for 2020,” said Workforce Development Manager Tony Varamo (pictured). “Our journey with CEFGA began over 20 years ago and it’s been a joy to see how … the organization [has grown] to what it is today. CEFGA has become the go-to partner for training, recruiting and developing talent for our industry.” 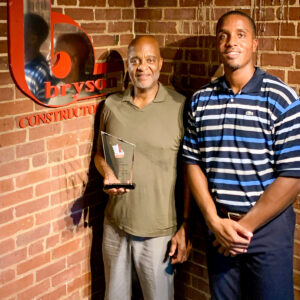 Company founder Steve Barnes (pictured with son Bryson Barnes) views Construction Ready as a win-win prospect for everyone involved – for graduates, it opens the door to a new career, and for hiring managers, it helps meet a critical need for workers in a thriving industry. Steve believes in passing the baton to the next generation, and he is doing just that by investing in young people through organizations such as CEFGA. Read more about Bryson Constructors.

K12 Pipeline Employer of the Year: ACE Electric, Inc. and Comfort Air Cooling and Heating
This award recognizes employers for working with their local elementary, middle and/or high school construction programs to make students aware of careers in construction. 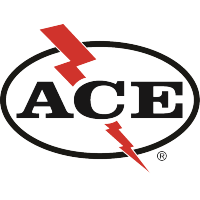 ACE Electric, based in Valdosta with multiple offices in Georgia, North Carolina and Tennessee, has been involved with multiple K12 programs around Georgia by providing opportunities to high school students including apprenticeships, guest speakers, specialized training and lunch-and-learn events, jobsite tours, and material donations such as conduit and boots. In summer of 2019, ACE Electric launched an apprenticeship program for students in the Lowndes County School System, working with Jason Van Nus, Work-Based Learning Coordinator for Lowndes County Schools, to identify and select candidates. Nine interns spent their summer with the company and were hired as apprentices at the conclusion of their internships. After graduating this past spring, four of those nine signed on as full-time employees, and a fifth was offered but decided to pursue a career in law and public safety. 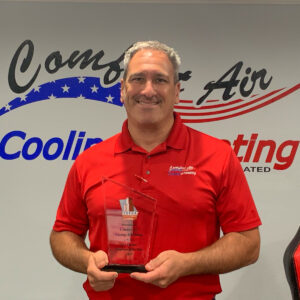 Comfort Air Cooling and Heating has raised the industry standard for partnerships in Houston County and demonstrates continued commitment to local students. Company Founder and Director of Operations Bernie Joerger has hired five students from the Houston County Career Academy HVAC program, and has donated his time and money supporting the Academy’s SkillsUSA Club while providing leadership as a member of the school’s Board of Directors. Joerger also has joined the Central Georgia Technical College advisory committee as President and has been hands-on in creating a seamless avenue for students to attend CGTC after high school. He led local business and industry leaders in creating three annual HVAC scholarships for students who attend CGTC after high school to further their studies in the trades 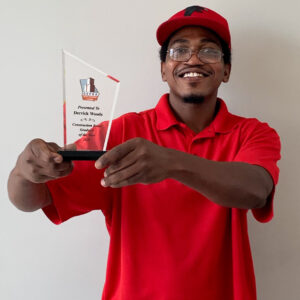 Derrick Woods graduated from Construction Ready at Westside Works in 2016 and joined Anning-Johnson Company, where he is a Carpenter Apprentice and has completed the company’s two-year, in-house carpentry training program. “Derrick is very reliable and hard working,” says Edwin Parra, Anning-Johnson’s Operations Administrator. “He has an excellent safety record. He is always eager to take advantage of union classes in the evening. He has come a long way and does an excellent job.” Read more about Derrick. 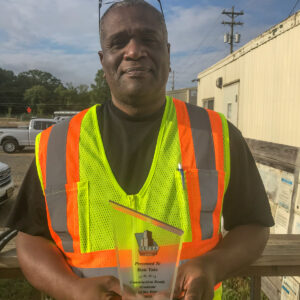 Ron Tate graduated from Construction Ready at Build Cobb in August 2017. Since going to work for Wright Brothers Construction, he also has completed CEFGA’s Construction Ready PLUS program, as well as a federal on-the-job training program to become a Construction Field Office Administrator. In that role, Ron’s responsibilities include labor entry for payroll, issuing and posting purchase orders, coordinating with vendors, tracking quantities, and more. His various training has earned him an extensive set of credentials and certifications, including OSHA 30, and OSHA, GDOT and FHWA compliance for job postings and EEO. Read more about Ron. 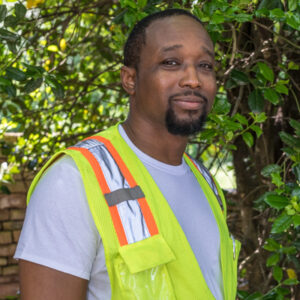 Darius King graduated from Construction Ready at Westside Works in December 2017 and was hired by Hogan Construction Group as a laborer. He proved to be a quick learner and a dependable worker, and within a year he had been promoted to an Assistant Superintendent role. Darius says, “Construction Ready gave me some focus in life. I’ve been through other programs and none of them really worked. At Westside Works, they told us if you put your best foot forward, someone would probably give you a chance. That’s the difference between Westside Works and the other programs – they are putting people into position to be hired. After that it’s really up to you to stay with the company.” Read more about Darius. 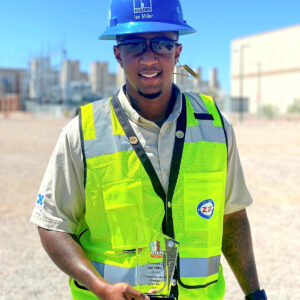 Ian Miller, a graduate of Construction Ready at Westside Works, joined Holder Construction Company in 2016, accepting a position as a Carpenter on the concrete portion of the Mercedes Benz Stadium project. His work ethic and commitment to quality made him stand out among his peers, and upon completion of MBS, Ian transferred to Holder’s Spring & 8th project, where he joined the Engineering Services department as an Engineering Tech in Training. He has received multiple promotions since then and now serves as a Field Engineer; in that role, he recently completed a data center build in Nevada and now is working on a new project in Ohio. Read more about Ian. 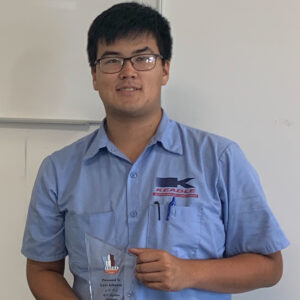 This award recognizes a graduate of a high school construction program who is excelling, advancing and thriving in the construction industry. Levi Johnson built an impressive resume as a student at the Houston County Career Academy. The 2020 graduate recorded an overall 3.1 GPA, and a 4.0 GPA in the HVAC Career Pathway, while holding leadership roles in the school’s SkillsUSA and Youth Apprenticeship programs.

As a senior, Levi entered the workforce through the Youth Apprenticeship Program, obtaining employment with Keadle Heating & Air of Byron. Since July 2019 he has logged more than 1,200 hours performing installations, maintenance, service calls and new construction within the industry. He has been given three pay raises and now drives his own company vehicle.

K12 Pipeline Teacher of the Year: Charles Kachmar and Patrick Mahaffey
This award recognizes teachers for the work they do with their local elementary, middle and/or high school construction programs to educate students about the value of careers in the construction industry. 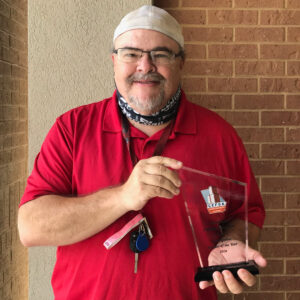 Metals Instructor Charles Kachmar – or “Coach K,” as he’s known by his Maxwell High School of Technology students and in the Gwinnett County community – is the prototype of a skilled trades teacher who loves what he does. Coach K works hard to give his students a love for welding by making it fun for them. For example, each year his classes hold a “Welding War” in which teams of students compete against each other in various skills competitions. The members of the winning team are awarded the coveted “Maxwell Golden Helmet” until the following year.

Coach K also has secured a significant number of trade industry partners throughout Gwinnett County. When it comes time to help put his graduating students to work, those trade partners and other employers across the county are quick to hire them, because they know they’re going to get highly skilled employees who are ready to work. Coach K also facilitates an annual “Career Signing Day,” during which students and employers come together to celebrate their hiring or commitment to continue their training at a trade school. 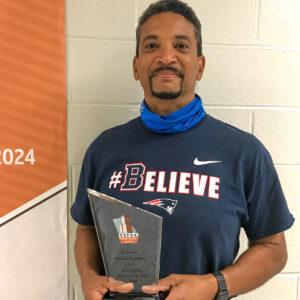 At Lilburn’s Berkmar High School, the construction program is arguably the most successful academic program on campus, thanks to the job Patrick Mahaffey has done in building it. Patrick’s priority is supporting students as they work to meet all graduation requirements while obtaining post-secondary credentials that can be used for years to come. The Berkmar construction program graduates students at a 90-plus percent rate, and Patrick consistently secures job and college opportunities for his students. His curriculum also gives students opportunities for meaningful hands-on experiences, such as building a new locker room floor for the school’s basketball program.

Berkmar Principal Durrant Williams says, “I’ve known Patrick since 2007, and he continues to amaze me. He started his tenure at Berkmar as a math instructor. Now as the Construction teacher, I have observed him take various effective teaching strategies once used in a core course classroom and use them in his current lab. He understands the importance of building relationships with students and is driven daily to support them in their life goals. Mr. Mahaffey is much more than an instructor; he is a leader and mentor for his colleagues. We are truly blessed to have him here at Berkmar High School.”